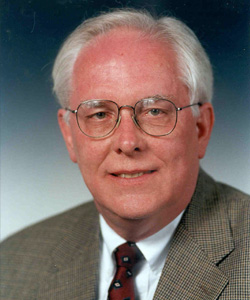 Tom was born on November 8, 1945, in Chicago. Before entering, he graduated from Quigley Seminary South in Chicago and studied for two years at Niles College Seminary. Tom entered the Society of Jesus on August 12, 1964 at Milford, Ohio. He was ordained on June 7, 1973, and he professed final vows on November 1, 1992, at Madonna della Strada Chapel on the campus of Loyola University Chicago.

Tom earned a BLitt in classical languages and English literature from Xavier University (1967); an master's degree in theology from Loyola University Chicago (1973); and a PhD in New Testament and Christian origins from Harvard University (1980). He also studied rabbinic literature for a year at the Hebrew University of Jerusalem (1976-77).

During regency, Tom taught theology at Xavier University in Cincinnati (1969-1970). After earning his PhD, Tom spent forty years teaching Theology (including New Testament and Early Christianity) at Loyola University Chicago. In Spring 2020, Tom retired from Loyola University to devote more of his time to research and writing.

Tom, a true scholar and writer, was a gift to the intellectual apostolate of the Society of Jesus. Tom's facility with languages—he knew nine languages—greatly helped his research and scholarship. He was a specialist of Philo of Alexandria, the intertestamental period, St. Paul, and New Testament studies. He was the author of four books: The Creation of Man: Philo and the History of Interpretation; Timaios of Locri, On the Nature of the World and the Soul; The Spirituality of Paul; and Paul's Rhetoric in Its Contexts: The Argument of Romans. He also edited Of Scribes and Scrolls: Essays in Honor of the Sixtieth Birthday of John Strugnell and wrote a number of scholarly articles. His areas of interest were the letters of Paul, Hellenistic Judaism, Hellenistic philosophy, and Gnosticism. Before his death he was writing a two-volume commentary on Philo's treatises Legum Allegoriae 1-3.

Tom was a wonderful Jesuit, a man of great integrity. He was a serious scholar and a dedicated professor and colleague. Tom was a man of prayer, a devoted priest, and an outstanding homilist. He had a deep love for the intellectual life and for passing on the tradition to the next generation of scholars, students, and believers. Tom considered helping a freshman learn how to properly write a paper equally as important as helping a doctoral student finish a dissertation.

Although Tom preferred to stay at home or write in his office, he kept in touch with—and kept up-to-date with the accomplishments of—former students and colleagues no matter where in the world they lived. He greatly enjoyed good, lively conversation— ranging from serious intellectual discussions about church, politics (especially local, Chicago politics), culture, or the life of the university to the friendly banter and repartee of academic gatherings, Jesuit living rooms and community dining rooms. He was brilliant— you didn't want to contradict him if you didn't have your facts right—but he also was a kind and humble man. With his keen intellect, his penchant for observation, and his ability to turn a phrase, he provided excellent advice to superiors and provincials.

Tom was a man of deep faith and great love for the church and the Society of Jesus. He always trusted that God would lead him in the correct direction. When celebrating his 50th Jubilee of entrance, Tom expressed God's care this way: "Through all of them [i.e. changes] I have felt God's guidance, although I must admit I didn't always, or even often, recognize it at the time. But in the end I've ended up somehow near where I ought to be—in God's good pleasure." Although Tom is in "God's good pleasure" now, he will be greatly missed by his friends.

Note: The Mass will be live streamed.